Trump lashes out at Republican leaders over looming veto override

Trump lashes out at Republican leaders over looming veto override 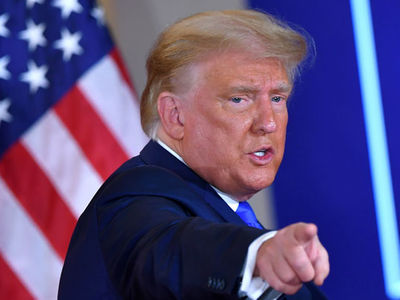 US President Donald Trump lashed out at the Republican leadership in Congress on Tuesday as he faces a humiliating first veto override in the final days of his term over his rejection of a defense bill.”Weak and tired Republican ‘leadership’ will allow the bad Defense Bill to pass,” the 74-year-old Trump tweeted from his Mar-a-Lago resort in Florida, where he is on vacation.”A disgraceful act of cowardice and total submission by weak people to Big Tech,” said Trump, who vetoed the fiscal 2021 defense bill in part because it does not repeal Section 230, a federal law that provides liability protection to internet companies.”Negotiate a better Bill, or get better leaders, NOW!” he said. “Senate should not approve NDAA (the National Defense Authorization Act) until fixed!!!”Senator Mitch McConnell, the powerful leader of the Republican majority in the Senate, shrugged off Trump’s tweets and scheduled a vote to override the president’s veto of the defense bill for Wednesday.But Senator Bernie Sanders filed a procedural objection that could end up delaying it until Friday. Advertisement

Sanders and other Democrats had demanded that McConnell agree to a simultaneous vote on increasing Covid relief payments to Americans from $600 to $2,000, a measure passed overwhelmingly by the House of Representatives on Monday and also backed by Trump.In a twin rebuke to the president, McConnell objected to holding a vote on increasing the direct payments while also calling for the White House veto of the defense bill to be rejected.The Democratic-led House voted 322 to 87 on Monday to override Trump’s veto of the $740.5 billion defense bill, with 109 members of the president’s own Republican Party breaking ranks and siding with the Democrats.The motion will also have to gain two-thirds support in the Senate to override the president’s veto.- ‘Pathetic’ -In his tweets on Tuesday, Trump also lashed out at Republican leaders for failing to support his baseless claims that he won the November 3 election against Democrat Joe Biden.”WE NEED NEW & ENERGETIC REPUBLICAN LEADERSHIP,” he tweeted.”Can you imagine if the Republicans stole a Presidential Election from the Democrats — All hell would break out,” he said. “Republican leadership only wants the path of least resistance.”Our leaders (not me, of course!) are pathetic,” he said. “They only know how to lose! P.S. I got MANY Senators and Congressmen/Congresswomen Elected. I do believe they forgot!”Trump’s attacks on the Republican leadership come one week ahead of a pair of high-stakes runoff elections in Georgia which will determine whether Republicans or Democrats control the Senate.Trump is scheduled to go to the southern state on January 4 to campaign for Republican Senate candidates David Perdue and Kelly Loeffler ahead of the vote the next day.Georgia has been a reliably Republican state but it voted narrowly for Biden in the presidential election and Perdue and Loeffler are locked in tight races with Democratic candidates Jon Ossoff and Raphael Warnock. The House veto override came a day after Trump caved in to pressure and signed a $900 billion coronavirus relief and stimulus package that he had also threatened to veto.Trump threatened for days not to sign the Covid relief and spending bill that had been hammered out by his own treasury secretary and had received broad bipartisan support in Congress.His surprise move risked shutting down the government from Tuesday and depriving millions of Americans of economic relief badly needed during the pandemic.Trump finally backed down under bipartisan pressure and signed the relief bill at Mar-a-Lago on Sunday out of sight of television cameras.Trump’s capitulation on the relief bill, the looming veto override and his increasingly strained relations with Republican leaders are the latest signs of his waning power as he prepares to leave the White House on January 20.Including the defense bill, Trump has vetoed nine bills during his four years in the White House. Congress has not previously mustered the votes needed to override any of his vetoes.

Masaza Cup: “Unfortunate” Busujju Get Negative Covid19 Results in Second Round of Testing

Masaza Cup: "Unfortunate" Busujju Get Negative Covid19 Results in Second Round of Testing