Uhuru Lifts Cessation of Movement in Nairobi & Other Counties

Woman, mother-in-law expelleded from association over adultery – The Informer UG

10 reasons why some women play hard to get – UGNEWS24 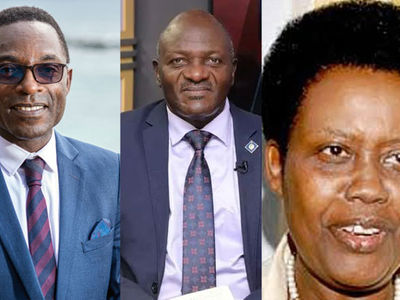 The Minister of Works and Transport, Gen Edward Katumba Wamala, has ordered a section of the senior management team at the Uganda Airlines Corporation (UAC) to leave office for at least three months to allow for an internal investigation.
Saturday Monitor was not able to establish the exact number of the national flag carriers’ managers who were affected by the decision that took effect on Wednesday following a meeting between the minister and the senior management team at the ministry’s headquarters in Kampala.
Sources in the corporation told Saturday Monitor yesterday that at least 10 senior managers and all members of the Board of Directors had been affected by the decision.
That would suggest the entire management team headed by the chief executive officer, Mr Cornwell Muleya, and the seven-man Board of Directors, which has former Minister of State for Local Government, who is also a former MP for Rubanda East, Mr Perez Ahebwa, Mr Benon Kajuna, Mr Godfrey Ssemugooma, Ms Catherine Asinde Poran, Ms Rehema Mutazindwa, Mr Charles Hamya and Mr Stephen Aziku Zua were affected.
However, another source with an ear on the local airlines industry told Saturday Monitor late yesterday that only five senior managers were affected.
That source named the top five managers as Mr Muleya, finance director Paul Turacayisenga, marketing director Rogers Wamala, human resource manager Joseph Sebbowa, and the safety director Bruno Oringi.
Advertisement

The State Minister for Works, Ms Joy Kafura Kabatsi, under whose supervision the airline falls, confirmed the development, but declined to tell what had precipitated the decision.
“I think you should call the senior minister (Gen Katumba Wamala). He is the one who handled [the issue]. He is the one who has (all) the information,” Ms Kabatsi said.
Surprise action by Katumba
Ms Kabatsi, however, seemed to suggest that the decision had taken her and other affected officers by surprise.
“I had called the Board and the executive director for a meeting but they did not turn up. I did not hear from them again, only to hear what you are hearing,” Ms Kabatsi said.
By press time, Gen Wamala had neither picked up nor returned our calls to his mobile number. And whereas the Ministry of Works and Transport spokesperson Susan Kataike did take our calls, she had by press time not gotten back to us as she had earlier promised.
Executive unimpressed
However, sources within the ministry indicated that the Executive has for the last several months not been impressed with the performance of the airline amid reports of abuse of office and financial mismanagement on the part of the senior management team.
Matters are said to have been exacerbated by a recent report of the Auditor General, which focused on the airline’s performance in the financial years 2018/2019 and 2019/2020, which indicated that the airline had posted a loss of Shs15b in the Financial Year 2018/2019 and losses of a staggering Shs102b in the Financial Year 2019/2020.
“The company was unable to realise its planned revenue, yet the expenditure on operations was way above projected costs. The company only realised $9.9m (Shs36b or 10.8 per cent) of the project revenue of $92.8m (Shs334b),” Mr John Muwanga, the Auditor General, noted in his report.
The report further pointed out that the airline’s expenses overshot planned costs and actual revenue, and that at least $29.2m (Shs105b) was expended on direct costs and another $3.6m (Shs13b) on direct costs.
The report also suggested that the airline had accumulated deficits during the Financial Year 2018/2019, which points to a risk of failure to meet future obligations and investment plans.
The report also indicated that the airline had failed to implement its business plan in accordance with the planned timelines because its business plan was not annualised and that the timelines, along with planned activities were meant to be achieved, were not specified. That, according to the Auditor General, made it difficult for one to evaluate the airline’s progress.
Ms Kabatsi declined to be drawn in on whether the contents of the Auditor General’s report could have been instrumental in forcing Gen Wamala’s hand.
She, however, suggested that the Executive was not happy that the airline was not doing enough to recover from the effects that the Covid-19 pandemic and the lockdown that was introduced as a containment measure. The airline is yet to find its footing.

By ZEPHANIA UBWANI Uganda will have to nominate another lawmaker to replace the fallen Mathias Kasamba at the East African Legislative Assembly (EALA). Officials of the Regional Assembly in Arusha could not confirm this but...

By Betty Ndagire City Hall Court in Kampala has sentenced a businessman to a fine of Shs800,000 and in defaulting, spend one year in jail over impersonating Kampala Capital City Authority (KCCA) officer and forging...

By Our Reporter The government of Uganda has banned flights to and from India following the high COVID-19 infections and deaths in the Asian country. India has so far recorded more than 18 million cases...

By U R N The president of the National Unity Platform (NUP), Mr Robert Kyagulanyi Ssentamu alias Bobi Wine, has said that he has no intentions of negotiating with President Yoweri Museveni for the release...

By U R N A Ugandan truck driver identified as Vincent Mulika, alias Kamanda is battling for his life at Juba Referral Hospital after he was allegedly beaten into coma by the military and immigration...

By U R N Justice Wilson Kwesiga has excused himself from a case in which Police Constable Davis Taremwa is accused of killing two people along the Entebbe Expressway in 2019. Taremwa was in 2019,...