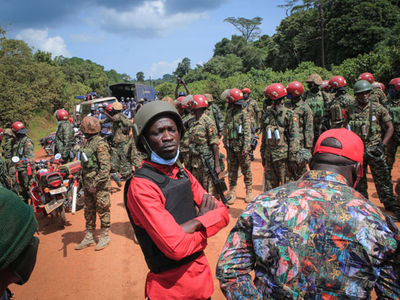 Ugandans vote Thursday in a highly-charged election after one of the bloodiest campaigns in years, as veteran leader Yoweri Museveni seeks a sixth term against a singer-turned-lawmaker half his age.Bobi Wine, the 38-year-old popularly known as the “ghetto president” who hung up the mike to enter politics, leads the opposition field trying to unseat Museveni, a 76-year-old former rebel leader who has ruled since 1986.Some 18 million voters are registered for the presidential and parliamentary ballot, which follows a pre-election crackdown more severe than any seen in recent times, and growing signs the race has been tilted against Museveni’s rivals.His opponents — most visibly Wine, who spent much of the campaign in a bulletproof vest and combat helmet — have been arrested, denied permission to rally, and seen their meetings dispersed with tear gas and supporters shot in the streets.Journalists covering opposition rallies meanwhile have been attacked, government critics locked up, and election monitors prosecuted, raising concerns over the transparency of the electoral process.The bloodshed, particularly the deaths of 54 people over two days of protests in November, was condemned abroad and has intensified international pressure on Museveni to ensure a free and fair vote.Greeting voters in his folksy broad-brimmed hat, cutting ribbons on tarmacked highways and unveiling new airliners, Museveni has been counting down the days to victory in upbeat campaign posters in the signature bright yellow of his National Resistance Movement (NRM). Advertisement

He has never lost an election, and most observers expect this week to be no different.In his 35-year rule Museveni has fused state and party so effectively, and crushed political opposition so totally, that any serious challenge to either him or the NRM at the ballot box is seen as next-to-impossible.”The ground simply does not make it possible to win any election against Mr Museveni. It does not really matter who the challenger is,” Bernard Sabiti, a Kampala-based political analyst, told AFP.Young and freeBut Wine’s rise has rattled Museveni, who has outlasted all but two of Africa’s long-serving rulers, and watched as ageing strongmen elsewhere on the continent have been ousted in popular, youth-led uprisings.The septuagenarian son of cattle keepers harks to an older, rural Uganda but presides over an overwhelmingly young population, with a median age less than 16, that is increasingly urban and educated.They have never known anyone but Museveni in charge, and are too young to remember the stability and relative prosperity he returned to Uganda after the dark years of Idi Amin and Milton Obote.Though he has campaigned under the slogan “securing your future”, the economic boom enjoyed during his early years has faded, and opportunities for young Ugandans are slim.Only 75,000 new jobs are created each year for the 700,000 youth reaching working age, trapping most in poorly-paid farm labour, the World Bank says.Wine, who was three when Museveni took power, blames corruption for holding back the dreams and aspirations of young Ugandans.”We want change. There are no jobs, no money, we can’t go to study and when we go to the hospital, there is no medicine,” said 23-year-old Dorah Wasswa, hawking cheap wares on a pot-holed Kampala street.On her wrist, a bright red band emblazoned with a clenched black fist — a symbol of Wine, who has promised supporters “we are removing a dictator”.”Bobi Wine will bring change and things will get better.”‘We are too many’Museveni says he is fighting fit — even dropping to his knees for push ups before audiences — but the grandfatherly charm exuded on the campaign trail has given way to flashes of anger.He says Wine is backed by “foreigners” and “homosexuals”, and suggested his political opponents are supported by “criminal gangs”.A wily strategist, Museveni has outfoxed challengers to remain firmly in control, though analysts say his position is largely assured through patronage and force, rather than popular appeal.He confronts in this election a divided opposition, with 10 candidates tackling him individually rather than presenting a united front.His perennial opponent, Kizza Besigye, declined to run after losing five contested and often violent elections against him.Wine, whose real name is Robert Kyagulanyi, has encountered the same heavy-handedness, but also constant harassment from police who accuse him and his supporters of violating coronavirus rules.Although Uganda is experiencing a rise in cases, the United Nations and rights watchdogs say special election measures to contain the pandemic have been weaponised to browbeat Museveni’s opponents while leaving the ruling party untouched.Wine says his supporters are “peaceful but assertive” and vows nonviolent protest should the election appear rigged.”We come with only words. He (Museveni) comes to us with bullets, bombs, grenades and teargas. We are non-violent. We are just too many for him,” Wine told AFP in a recent interview.