Lumumba: “We are investigating our loss in Buganda”

Four days without Internet reminded me of prison

Bobi for court as EC excludes over 1,200 polling stations – edge.ug 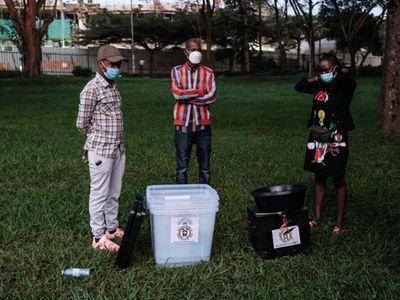 Voters in Uganda on Thursday morning begun casting their ballots in one of the country’s most consequential elections in over three decades.The voters, will decide either to extend the rein of President Yoweri Museveni to a sixth term, or vote in pop-star-turned-politician Robert Kyagulanyi, popularly known as Bobi Wine.Museveni, the 76-year old president of the East African state and who has been at the helm for over 30 years, hopes to use the election, and a possible win, to cement his legacy as one of the country’s longest serving rulers.The Ugandan president is banking on the vastly rural population — where he enjoys a near fanatic support — to tilt the tide in his favour and rein in on the growing popularity of Wine, who has been consolidating a strong opposition against Museveni in the past couple of months.Museveni has been campaigning on his track record of transforming lives, especially those of the rural population, and improving access to healthcare among other things to win the vote. He has often described the opposition against his leadership as a populist move aimed at exciting the youthful population but with little hope of success.Stood the test of time
Advertisement

“The National Resistance Movement has stood the test of time. We have correctly diagnosed Uganda’s problems and prescribed the correct solutions. We have resolved many bottlenecks to Uganda’s progress and will continue to do so. It is why we are days away from victory,” Mr Museveni said in an earlier interview.Wine has been rallying supporters against the leadership of President Museveni, whom he has likened to a dictator and the enemy of the Ugandan people.The opposition leader is banking on the youthful and urban population of the East African country to defeat Museveni in the polls amidst a growing crackdown by the police.During the just concluded election campaigns, scores have been arrested and others injured in the confrontations that have already attracted the condemnation of international observers.Tension between the police and the opposition has been on the rise, with accusations of intimidation and harassment of key opposition figures in the past couple of months.Uphill taskSome observers believe that while the opposition against Museveni has been on the rise, defeating him in the election may be an uphill task.Mr Francis Kibirige, an analyst and researcher on Ugandan politics, said that while the writing has been on the wall for Museveni for a while now, his popularity, the power of incumbency and a fragmented opposition may work to his advantage.“It is still not clear what the results of this election will be. But what is certain is that no one can win only on the youth vote, the gender vote and all. You only win on the regional vote, meaning that one must pick votes from every place in the country,” he said.Kibirige, a member of Afrobarometer — a Pan-African research institution — said that the only hope for the opposition is to try to tilt the margins away from Museveni as much as possible by rallying as many people as possible to vote in the election.“The other challenge is that in Uganda, there is also a considerable number that do not have identity cards, which are the essentials in voting. The polling station locator are also not accessible to some, and so you may end up having people turning up at the wrong stations and being turned away to go find their voting stations which may be distances away,” Kibirige added.Wine has likened the leadership of Museveni to nothing but a disappointment, not only to the older generation of Ugandas, but also to the younger ones.ArrestsHundreds of Wine’s supporters and members of the civil society have been arrested in the past months, drawing criticism from the international community and human rights groups.The Ugandan police force has been accused of intimidating opposition figures in including members of the civil society and journalists as the country votes in one of the hotly contested elections in decades.“General Museveni needs to tell the world what he intends to do in this election —that he should arrest my entire campaign team, my assistants and supporters. Last night, the military yet again arrested so many friends and comrades, two days to the election! Others living as fugitives,” said Wine on Monday.But Museveni, in his campaign manifesto, praised his track record as one that had the voters and the people of Uganda at its centre.“The National Resistance Movement stays committed to improving and bettering our country’s health facilities.“Our manifesto is the best. Only The National Resistance Movement guarantees you peace and stability. We have the surest plan for economic transformation and prosperity. Uganda is on course to middle income status. It is why most Ugandans agree with us. We are certain of victory,” he said.