I Only fell in love with one woman – Crysto Panda 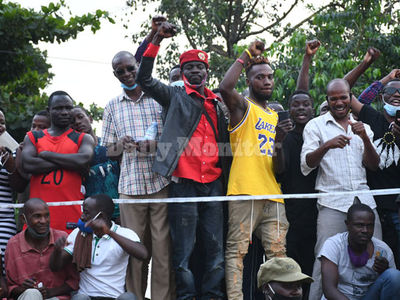 Kampala capital city has been relatively peaceful for much of the day, with as voters cast votes, though at most of the polling stations, materials arrived late.Failures by the biometric voter verification kits also added to their miseries.However, by evening, security forces had started harassing opposition supporters who started celebrating some of their candidates that were enjoying an early lead.NRM supporters hailed Election Day as successful, a fit they attribute to party flagbearer and incumbent president – Museveni.“I am happy that this has come to an end with peace and tolerance without any violence. The turn up is very good and I think more people are going to take part in this exercise,” NRM flag bearer for Rubaga North Betty Olive Namisango Kamya who voted at Lungujja Kitunzi Polling station said.Opposition differed calling the day a mockery of Ugandans. Advertisement

National Unity Platform (NUP) flag bearer for Rubaga North Abubaker Kawalya said Ugandans have been yearning for change and this is the right time to have the right decision.“Although most of the contestants from the central region were denied opportunity to reach the electorate, we are very sure that Ugandans have made the right decision and they have turned up in big numbers,” he saidMr Kawalya added that as opposition, the campaign period has not been good due to several killings, arrests and threats and blockades by security operatives.“I warn the EC chairman and his team that Ugandans are waiting for the time of announcing results because they are tired of the regime which has been in power for the last 35 years,” he said Chaos as security forces battle opposition supportersAt Wandegeya, chaos emerged as security forces battled opposition supporters who were already thronging city streets to celebrate victory of their candidates.Daily Monitor reporter, Shamim Nateebwa said police and army engaged in running battles with supporters of NUP presidential candidate Robert Kyagulanyi aka Bobi Wine after armed forces started beating pro-opposition supporters who retaliated with throwing stones at the security forces.Prior to the standoff, opposition supporters had also chased away police officers who had stood as representatives for candidates Patrick Oboi Amuriat, John Katumba, Joseph Kabuleta and Mugisha Muntu who did not have agents at the polling station as vote counting got under way.At Makindye, Kabalagala police used a ‘costa-bus’ to pick up people who had remained at the polling stations to witness vote counting.At Wabigalo, Gabriel Bule says the ‘costa-bus’ was nearly filled with suspects they had picked up.Both uniformed and plain clothed security forces were seen clobbering and arresting voters they got at polling stations.At Kireka, journalists and citizens were denied access to tally centres where vote counting was ongoing.According to Bule, the Nakawa DPC and the RCC said they had received instructions from “above” to chase away people from polling centres.We were unable to independently verify the claims by the two security officers by press time.By Gabriel Bule, Shamim Nateebwa, Shabibah Nakirigay, Juliet Kigongo, Betty Ndagire & Prossy kisakye editorial@ug.nationmedia.co

By Frederic Musisi The European Union (EU) yesterday expressed concern over continued harassment of political actors and some sections of civil society following President Museveni’s re-election in last Thursday’s polls.In a statement from Brussels, the...

By Robert Muhereza By Emmanuel Arineitwe Church of Uganda Archbishop Dr Stephen Kaziimba has held a secret meeting with the estranged husband of the woman linked to a sexual liaison with Archbishop emeritus Stanley Ntagali.According...

I Only fell in love with one woman – Crysto Panda