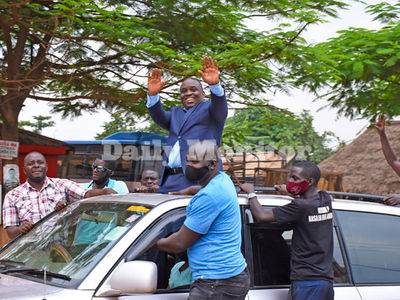 Incumbent Kampala Lord Mayor Erias Lukwago has been re-elected for the third time to lead the capital City for the next five years.After seeing how the National Unity Platform (NUP) party candidates in the presidential and parliamentary elections swept the Kampala vote last week, Mr Lukwago expected a tough ride in the Local Government elections on Wednesday.However, he was handed a surprise trust after receiving 194,592 votes against the NUP candidate Nabilah Naggayi’s 60,082 votes in the polls whose final results were declared yesterday.  Mr Lukwago beat Ms Naggayi by a difference of 134,510 votes.Whereas voters in all the five divisions of Kampala District (Nakawa, Makindye, Kawempe, Kampala Central and Rubaga Division) mostly voted NUP candidates as lord councillors, they instead voted Mr Lukwago of Forum for Democratic Change (FDC) for the Lord Mayor seat, suggesting they have more trust in him than in the NUP flag bearer.The FDC president, Mr Patrick Oboi Amuriat (POA), yesterday said Mr Lukwago was voted back because of his personality, having served the city population well in the last two terms.  Mr Amuriat also attributed Mr Lukwago’s victory to the personality of Ms Naggayi, whom he said had already lost popularity.“Ms Naggayi has let the people of Kampala down because she was not present when Parliament changed the Constitution to remove the presidential age limit. She did not do much for the people of Kampala when she was their Woman MP. So people lost hope in her. She was also seen dining with NRM people. Since she had lost popularity, her coming in NUP could not cause any change,” Mr Amuriat said. Advertisement

The chairperson of Kampala Arcades Traders Association (Kata), Mr Geoffrey Katongole, said Ms Naggayi could not beat Lukwago for the seat because he has fought for the poor dwellers in the city.Mr Katongole said Lukwago has been seen fighting for street vendors, arcade traders, market vendors, boda boda riders, taxi operators and the poor people in the city who are the voting population.CampaignsMr Elvis Kintu, an official agent of Mr Lukwago, told Daily Monitor that his boss had a team that was moving from door-to-door canvasing for votes.He said Lukwago himself was the head of his campaign team, but also appointed a coordinator per division in Kampala, who were given mandate to conduct scientific campaigns.Mr Kintu said the Lord Mayor  has demanded accountability from city authorities and has not been implicated in corruption scandals.“People want to vote people who practice what they preach. Ms Lukwago has been preaching the rule of law and accountability and he has lived by that,” Mr Kintu said.Ms Betty Nambooze (NUP) and Independent candidate Muhammad Nsereko, who won last week’s elections for Mukono Municipality and Kampala Central parliamentary seats respectively, were also seen campaigning for Mr Lukwago on a local television.Daily Monitor could not get a comment from Ms Nambooze by press time.A total of 299,959 out of 1.2  million registered voters turned up to cast their votes.dmukhaye@ug.nationmedia.com