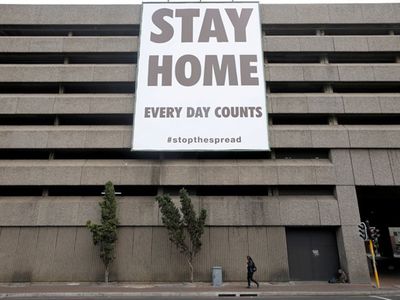 Coronavirus misery hung over Christmas preparations worldwide on Thursday, with countless millions forced to cancel plans or limit festivities under fresh virus lockdowns.After a grinding pandemic year that has seen more than 1.7 million people die from Covid-19, a slew of new outbreaks are a stark reminder that despite emergency vaccine roll-outs, life is unlikely to return to normal quickly.In Australia — often a rare bright spot in keeping the virus in check — a growing cluster of cases in northern Sydney has confined residents to seaside suburbs and prompted a ban on all but the smallest Christmas family gatherings.Jimmy Arslan, who owns two cafes at the epicentre of the city’s outbreak, said trade was down 75 percent and his Canberra-based family had been forced to cancel their Christmas visit.”It’s heartbreaking. It’s a very, very sour ending for a sour year,” the 46-year-old told AFP.”Let’s just say we all should welcome 2021 and kick 2020 in its arse.” Advertisement

In Europe, much of the continent is enduring a dark winter of resurgent outbreaks. Germany has been forced to cancel its famous Christmas markets and Pope Francis plans to bring the Vatican’s Christmas midnight mass forward by two hours to meet Italy’s curfew rules.In Bethlehem — which Christians believe is the birthplace of Jesus Christ — mass will be held without worshippers and broadcast online.Nicolas al-Zoghbi, who visited Bethlehem’s Chapel of Saint Catherine in the lead-up to Christmas, said the joyfulness of the season had been replaced by “depression”.”We hope the Lord will destroy corona, just get rid of it so we can return to our previous life,” he said. Holiday isolationBut for many, the isolation that has defined the past year will continue into Christmas Day and beyond — such as in Belgium, where residents are largely limited to welcoming a single visitor. In the Catholic-majority Philippines some are choosing to spend the holidays alone because of the risk of catching the virus on public transport, as well as quarantine rules making travelling time-consuming and expensive.”I am ordering food in, re-watching old movies, and catching up with my family by video,” said Kim Patria, 31, who lives alone in Manila.Britons, meanwhile, were cut off from swathes of the world on their Sceptred Isle, due to the emergence of a new Covid-19 strain.Some UK border restrictions have been temporarily relaxed for the holidays, but thousands from other European countries are still stranded in England.”Home for Christmas? Forget it,” said Laurent Beghin, a French truck driver who delivered his cargo but was still stuck days later.In the United States, more than one million people have now been vaccinated, but the country’s coronavirus response remained chaotic as Donald Trump helicoptered off the White House lawn for one of the last times in his presidency.The Republican and his wife Melania were bound for a vacation at his glitzy Mar-a-Lago resort in Florida after his shock rejection of a massive coronavirus relief package passed by Congress.New Year’s celebrations are looking downbeat globally, with lockdowns looming for Scotland, Northern Ireland and Austria through the post-Christmas period, while Portugal has imposed a New Year’s Eve curfew.For now, Sydney still plans to ring in 2021 with its famous Harbour Bridge fireworks display, with New South Wales state Premier Gladys Berejiklian pledging the seven-minute spectacle will go ahead “no matter what”.But as with most of 2020, people are being encouraged to watch on television from their sofas.